The Pantsu versus Baka project

I’m pivoting. I’m starting up a new project, a new game. This new game is kinda like the spiritual successor to Kawaii Ketchup.

As webdva, Kawaii Ketchup was my first startup. Now its creation has led to new horizons.

I created a new mechanism for receiving feedback from users. Yay! The feedback mechanism itself warrants its own codex entry.

It has first been deployed on two of my web games, Kawaii Ketchup and the new game. Here’s the first time someone ever used the feedback system: 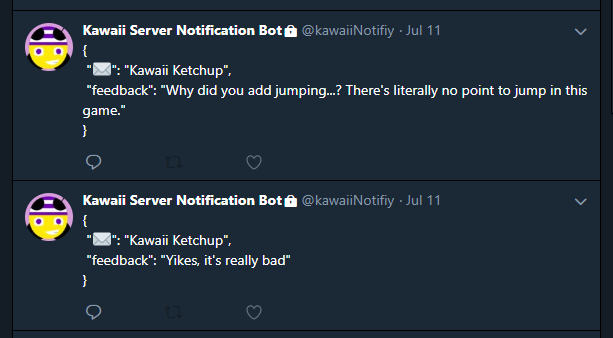 I don’t know what the true intent or meaning of the first (bottom) message is, but, above all, one is better than zero and any feedback is better than none. The reason is that distribution (or marketing) is important for your product. Like, really important. You have to get a product in the hands of your customers and collect data, such as in the form of feedback as demonstrated here.

So, jumping was, in fact, essential to the game. I left the jumping ability in the latest update to the game.

And they gave the game a one-out-of-five star rating. It’s not the first time one of my games ever received a negative review. In fact, having a review at all is better than not having anyone play your game or use your product at all. Because distribution is important. Having a product to distribute at all is important.

A startup founder must work together with his or her customers to create a product that delivers value (and the startup founder has to not be deterred by criticism of his or her beloved startup, of course). This is my chance to improve my working relationship with my target customers, the players.

As such, I shall pivot from Kawaii Ketchup after eight months of development and start up a new game. I listen.

Kawaii Ketchup and its lesson of complexity

It, possibly, failed to “do one thing and one thing well.” It was ambitious. The art was expensive–very costly to produce in terms of effort and energy.

I learned that some systems have a great inherent complexity despite their simple outward appearance. With new eyes I can actually see what they truly are. I now know what systems that have large complexities look like. Not only am I more familiar with my systems, but I am also more experienced with the interaction between my systems and their environments. This new great understanding will give rise to new development and program policies.

And I used Typescript as the language for the game. I wrote a tutorial about a problem that I had to solve because of Typescript. Even though types can provide safety, setting up and using Typescript incurred a large cost as it is not a simple development system. So, I must refrain from engaging in such an activity ever again. I shall abstain from using complicated development tools to avoid the risk of high program costs. Which I can’t afford.

My marketing efforts for the game were deficient. I’ll do better next time.

I published a development log on itch.io. In the publication, I declare my new developer-player commitment. This is what I wrote:

Entitled: I succeeded while making this game

Kawaii Ketchup, my dear game, has paved the way to a bright future.

I now have more experience in game systems development. I know what activities have high utility and what don’t.

I proposed the Baka Update. It was going to address some of the players’ concerns and move the game into a new development and traction phase, but creating such an update would be costly.

I’m still committed to delivering great value to others. From now on, webdva’s games will be simple, fun, and made in collaboration with the player.

The less complex a system is, the easier it is to create it. Adhering to this belief, I want to make it easier to create new games so that I can focus on delivering great value to players. As such, my newest game will be made with simplicity in mind.

Since we’re in the video game business, fun is a constraint that is very strong.

Anyway. I also have the challenge of crafting fun into the new games that I will give birth to.

Fun is an essential ingredient in video games. So, if I didn’t know what fun was, I’ll now go and find out! (This is webdva trying to be funny and hip, by the way)

Made in collaboration with the player

This new collaboration initiative is, like, very important. It’s my new commitment and I’m willing to talk to 30,000 players in-person so that we can work together and make great digital systems together–great simple and fun games. And it’s my responsibility to make sure that we collaborate together.

@travisk Mr. Kalanick, I heard that you liked the game 2048. So, I thought that you might like this game I made: https://t.co/rIu8fcJfS1

With the outbound marketing, I’m “do[ing] things that don’t scale.” I don’t need to automate this process or reach high marketing goals. I only need several customers–or one. I’ll iterate that success afterward.

I also might need to collect some data too. For data science purposes which can help me in the future.

I was originally going to name the game Pantsu versus Baka, but I may now name it Strange Platformer Game.

It’s like a puzzle platformer. It will adhere to my new game making ethos of simplicity, fun, and collaboration with the player. I won’t be making pixel art for this game or anything expensive like that, so I’ll have to find a creative aesthetic to overcome that constraint.

Endeavoring to build an audience

Adhering to my commitment, I uploaded the game to newgrounds.com, but someone said that it wasn’t a game and that I should share it on the forums instead to get the results I was looking for, so I complied and unpublished the game. Still, I was able to obtain some feedback.

And another from newgrounds:

It seems that others perceive the game to be something like a work-in-progress which is kinda not what I expected. It kinda seems like they themselves expect more. Maybe I should pivot from this market-space as it seems to be expensive (in terms of energy and effort) to navigate. There were also positive responses and feedback too.

Converging to an optimum

I must not forget these awesome effects that I’ve created as a technology entrepreneur. I’ve made yet another browser game in less than two weeks. I’ve gained experience in outbound marketing by cold-calling people on Twitter about my product. These effects can be leveraged and transformed into super effects.

Whatever I may choose to do, I will eventually converge to a global optimum of prosperity as my learning rate and gradient ascent algorithm are divine.