I’m starting up a machine learning framework and I’ve implemented k-means clustering for it.

I’m building KawaiiML to help me gain a better understanding of machine learning, such as how and why some of the algorithms work. I also want to slowly build and nurture an open source machine learning framework to aid others in their own machine learning endeavors, because I’m kind and noble. I’ve already written implementations for k-means clustering and gradient descent (which will be discussed in next week’s codex entry).

The following guides the reader through an implementation of the k-means clustering algorithm.

An algorithm for performing k-means clustering

The k-means clustering technique uses iterative refinement to alter observation-cluster memberships and cluster centroids as it endeavors to find its objective of the set of means and cluster groupings that yield the smallest intra-cluster variance.

Once inter-cluster variance has been fully maximized, convergence will have been reached and the algorithm stops. The algorithm will have then yielded the set of means and observation-cluster pairs that satisfy the algorithm’s objective.

Prior to the iterative refinement process, a set of cluster centroids must be given. The initialization method that we will use in our implementation will simply consist of randomly selecting observations and using their values as the initial means.

The following helps show how observations are assigned.

At the end of each iteration of the process, convergence will have been determined to have been reached when the updating of the cluster centroid means does not result in a change.

Our particular implementation will use Python as the programming language and numpy for some of its conveniences, like normalizing the observation vectors and conveniently summing elements in a list.

First, we design the function and its interface. The function that abstracts the implementation will simply be named kmeans. The function’s interface involves passing the set of observations as a numpy array and the number of clusters $k$ as an integer.

We want to track the number of iterations that occur, so we initialize a counter iterations to zero.

Prior to engaging in the iterative refinement process, the algorithm initializes the first set of cluster means. It creates the list of means by randomly iterating through $k$ iterations and populating a list named cluster_means that will store the cluster centroids.

A loop that always executes at the top due to its True condition will be used as the iterator for the expectation-maximization process. The loop’s infinitely occurring execution ceases at the bottom of the loop block whenever convergence happens.

On each expectation step, a list of empty lists clusters is created which will contain the observation-cluster memberships. Then, for each observation, it is considered the closest to the cluster centroid or mean whose Euclidean distance squared is the smallest. The observation is then added to the cluster’s list of observations.

The algorithm then maximizes the cluster means by calculating new means and adds them to a list new_cluster_means.

Upon exiting from the last iteration, the function returns the results as a tuple containing the list of means, the cluster groupings, and the number of iterations it took.

Example of the implementation in action 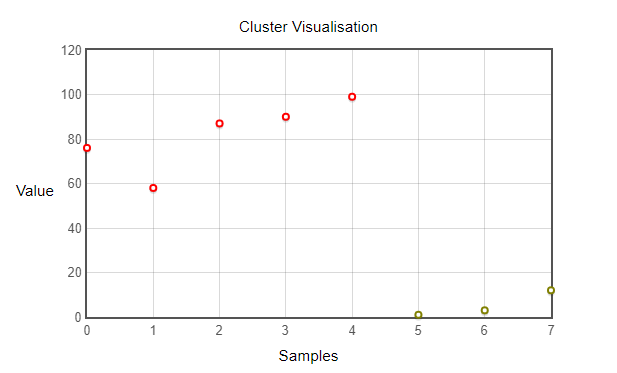 A consideration of this implementation is that it can only operate on vectors of one dimension. Also, the implementation’s initialization of the cluster means is flawed as there’s a chance that duplicate initial means could occur thereby affecting the final clustering. But for this guide’s purpose, the code used suffices. And I’m not going to mention the concept of local and global optimum regarding k-means clustering as neglecting to mention it also suffices for this guide.

But there is still much work that needs to be done.