I'm learning how to be a superstar innovator

A report on the Pantsu versus Baka project.

I started up an outbound marketing initiative for the Pantsu versus Baka project in order to collaborate with the players while starting up the game’s development. I reached out, personally, to potential players in the hope that, with each one, we would develop a long-term mutually beneficial relationship, with me being the provider of a good game and them being the customer who receives a good product.

It took the challenging and delicate composition of sixty-eight cold tweets to get approximately four positive responses for that month-long initiative.

Here’s one positive response I received:

Nice game. I actually got hooked for a minite

And another positive response that came with kind encouragement which I’m very grateful to have received:

Hi there! I’m SkittlesBeats, nice to meet you! Your game looks great so far! I’m surprised I could play it on my phone, hahaha. Keep at it! 👍🏾✨💙✨

So I was on to something as indicated by the market.

And here was data on the game’s player controls:

The player control is smooth

So, it was safe then to conclude that the game was heading toward a right direction.

Because of my great inherent strength, I was a more insolent knight of the markets back then, when I first started out on this path. But I’ve painfully learned to respect the markets and their awesome might, and so I humbly sought communion with one of them–even though I still seek to conquer them for my ambition in the decades to come.

I obtained valuable insight during my communion with the market. Not only have I obtained market data, but I’ve also obtained experience.

I did not expect to use a combination of outbound and inbound marketing as this project is now in a new marketing phase consisting of inbound marketing in contrast to its original marketing phase. The lessons learned from this accidental discovery will be integrated into my new startup process which is always changing. I must remember that this dynamic process exists to serve my ambition of fostering innovation which in turn serves another ambition.

I leveraged emojis to add heart and unicorn visuals to the game but then I later removed them.

If the player doesn’t move for a certain amount of time, then a sleeping idle animation will play. This too leverages emojis and may be changed.

Iterating on the atmosphere of the game

I want to give players the benefit of atmosphere, like how great games do. This will be a challenge, but I have courage on my side.

I want it to have a strange atmosphere.

I added level hazards and they look strange. And scary. And dangerous.

Some plans for the game

Ever since I started using the Phaser game development framework to make games, I’ve had issues with being able to create texture atlases.

The ShoeBox utility is my lifesaver. It helped me finally solve the problem of being able to create texture atlases for my games. At first, its complex interface and functions were difficult to comprehend, but I was tolerant and open-minded and I was determined to exploit its utility for my benefit.

Now I have the capability to create texture atlases for my games.

I had to “put out a fire.” I had to resolve a technical issue that threatened the integrity of the system I was building.

I was marketing the game on an internet forum for HTML5 game development and someone kindly informed me (which I’m very grateful for) that the game had its Phaser.Game.preserveDrawingBuffer setting set to false which resulted in the game flickering on some devices. If I could not have resolved the issue, then the number of supported devices would have decreased and that would have decreased the size of my future audience.

It’s still an issue, but the system has been “patched.” So, the system looks like that now, a patched-looking system. That’s how it is in the beginning, when such a system, a startup system, is being constructed. Generally, the quality of the system is a function of time and it improves as time increases.

I had the fortune of possessing immutable courage to reach that desired state variable of a working system and a system that meets its performance requirements. Oh, there’s possibly some state variables that I’m not tracking which I do need to track in order to achieve project success, but I will eventually discover them and then I will relentlessly and enthusiastically exploit them for my ambition.

I’m seems that I’ve caught up to others. I never would have expected such a thing back then, in a time of yore: me making a game with great marketing copy and a game that looks like–what I would have considered back then–a typical hip indie game.

And now to go even further beyond

The Kawaii Ketchup game, the predecessor to this current project, has accumulated about ninety total views.

This Pantsu versus Baka project, on the other hand, has accumulated way more total views at over three hundred total views.

The large traffic spike of the new marketing phase makes the initial marketing efforts for the game look pale in comparison. I have faith in the strategy of leveraging the properties of the long-tail distribution phenomenon. This proposed strategy will have me constantly marketing the game and thus creating other traffic spikes, each with their own long-tail distributions. This combination of successive traffic spikes should create a very desirable marketing effect and help me achieve my goal of establishing an audience as I sincerely believe that my new audience members will lie somewhere in those probability distributions.

As an example of my planned marketing efforts, I’m going to write a tutorial for other game developers on how to recreate the game’s idle animation feature in order to attract new audience members. This might only create a small spike of traffic, but it will benefit the game and me in the long-term as I believe that people may search for such a thing in the far future.

There is much work to be done.

Each day I may work on this project and facilitate its success. But as each days ends, as my body yields to daily wears, I shall bear an immutable commitment to the project’s success. Every nanosecond must be composed of great effort.

For I have an ambition that is the fulfillment of a great and noble mandate: before this decade is out, I will have a means of income.

The utility of creating documentation

As the complexity and the size of the game’s internals were increasing, I found that it was becoming more difficult for me to comprehend the source code without expending a lot of effort. So, I created documentation that functions as a manual for the development of the game. The documentation also includes reminders such as what the project’s constraints are and it includes instructions such as how to create levels using the level creation system that I use.

I just started this project sub-task of writing documentation for the game and it does incur a significant energy and time cost, but this is what the documenation currently looks like: 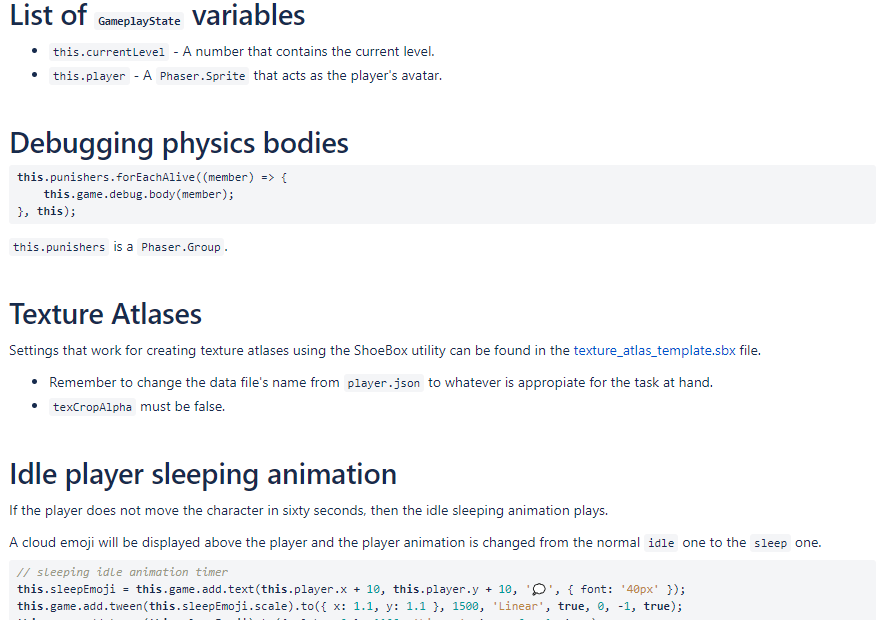 I’m tempted to share the source code thereby making the game a free and open source game so that others can marvel at the useful and well-written documentation I crafted.

However, I must not forget to be careful about expending too much time and effort on the game’s technical development to the detriment of the marketing efforts. It seems that I’m delicately balancing multiple efforts as I’m, in fact, engineering and operating multiple systems simultaneously: the technical system of the product I’m making and the social/economic system of the market I’m interacting with. Performing such a deed admirably will require experience as well as commitment and I’m currently nurturing such as I’m currently enduring the process of doing so.

This can be scaled in the future, with the engineering and operation of even greater and more complex systems. That would facilitate the creation of a superstar innovator who’s experienced in and committed to fostering innovations.

All this… is for you, dear player. You and I, we are in a special relationship. I must tend to your needs by enthusiastically developing technology and you provide me with great incentives to perform well while doing so.

I pray thee, play the game and maybe use the feedback form so that I may obtain data with which to improve the game–to your liking.

After all, it’s a web game where all you need is a web browser. And that is very convenient!